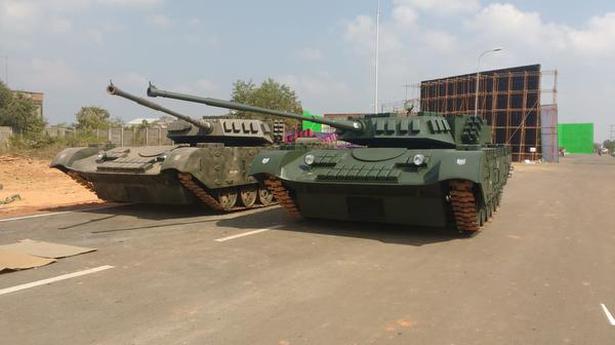 The person behind a few of Malayalam and Tamil cinema’s armoured tanks, amphibious autos and plane

The makers of upcoming film Malayan Kunju, produced by director Fazil and starring Fahadh Faasil, had a rather specific request recently: they wanted vehicles that have been crushed by a landslide. The art director Jyothish Shankar approached Kodunganallur-based Rajesh Thaithara for the job, who is on it currently. Rajesh is well-known in the film industry for fabricating vehicles for shoots.

Rajesh at the workshop where 2.0 vehicles were fabricated

He is busy with a few projects now, but he fondly recalls his most satisfying project to be Rajinikanth’s 2.0. Remember the armoured tank in 2.0 which the humanoid robot Chitti uses to fight the villain, Pakshi Rajan? Or Chitti’s caravan in the film? These are all products of Rajesh’s imagination and innovation; he used the image of a T72 armoured tank which he then used as a guide to create four for the film; he also built a ‘rocket launcher’ for it under instructions by the art director T Muthuraj. “When director Shankar sir visited the workshop at EVP Film City, near Poonamallee, he asked if it was a military camp,” recalls Rajesh. From illustration to fabrication, the project took him two years.

“Being chosen over others who wanted the job meant a lot. The others were from Mumbai, Chennai and Bengaluru. I had not seen a tank like that until then. Muthuraj sir gave me an outline and explained what he had in mind. Making a shape of something is easy, making it work is the hard part. The tank had to be 26 feet long, the barrel 16 feet long and it had to turn 360 degrees as well. Experimenting on the chain system, which makes them move, cost ₹3 lakh,” he says. Pick-up trucks — TATA 207 — became the base for the tanks. A Taurus lorry ‘became’ a rocket launcher, while a bullet tanker transformed into Chitti’s caravan. In all, he made 23 vehicles for the film. It was a game-changer for Rajesh, in terms of remuneration and recognition. “Until then, my neighbours had no clue about what I did,” he says. By then, he had been working in the Malayalam film industry for more than a decade.

A bullet lorry transforms into a stylised ‘caravan’ in 2.0

Among his other interesting stories include building and shipping an Iraqi armoured tank in 26 pieces via a container lorry from a workshop in Kochi’s Gothuruth village to Ramoji Rao Film City in Hyderabad. It was assembled there for the shooting of Malayalam film Take Off. “Since it came after 2.0, this was easy,” says Rajesh, whose recent work is an amphibious vehicle, and which can be seen in the yet-to-be-released film Malik, directed by Mahesh Narayanan.

Over the years, his vehicles have featured in a slew of Malayalam and Tamil films such as the under-production Indian 2, Vimaanam, Double Barrel, Ulsaha Committee, Kammara Sambhavam, Inspector Dawood Ibrahim, Sakhavu, Loham, Unda, Mikhael, and Aanachandam to name a few. He even has a Hindi film to his credit, the John Abraham-starrer Madras Cafe. For the civil engineer from Kodungallur near Kochi, this life is the manifestation of a dream. “Don’t they say that if you dream of something, it will happen? It was something like that for me,” says Rajesh, who started off as a driver on the sets of the 2004 Malayalam film Runway.

After completing his Engineering course, he spent time painting graffiti and advertisements on walls. He refused an engineering job since he had to pay to get it. Rajesh tried his hand at Government jobs, but he could not take the “discomfort of sitting in an office”. This work excited him. “It never gets boring. I am doing a new thing every day. Each project is different from the last. If I am working in Kanyakumari one day, the next day, I would be in Palakkad or Chennai or Hyderabad,” he says.

The path to creation

Rajesh’s interest in drawing comes in handy with his work, as does his knowledge of engineering when he illustrates, designs and instructs his workers when they fabricate vehicles. “An art director explains what he has in mind; usually, it would be an image from the Internet and I would be asked to create something along those lines,” he says. He has to make the vehicle in such a way that there is provision to place the camera. The materials he uses besides the chassis and/or engine of a vehicle (depending on what he is building) are square pipes and metal sheets. Rajesh does his research before he starts work. Like for the 2017 Malayalam film Vimaanam, for which he built two lightweight aircraft. “I spent three weeks studying how an aircraft works, how it flies. I recalibrated the engine of a Maruti Suzuki 800 on which it was built, CGI was also used. I ensured that the propellers work on the same principle,” he says. While one was a dummy, the other could ‘taxi’ a short distance on the faux runway.

He has a workshop — World Class Designers (WCD) in Kodungallur. For projects that require secrecy, he works in isolated workshops and away from prying eyes and cameras. If for Vimaanam, it was a workshop near Nedumbassery, for the tank in Take Off, it was a workshop on one of the islands in Gothuruth.

“The mystery and suspense is important. It is important that photographs do not appear on social media, so I prefer to work in isolated places,” explains Rajesh. He has a team of seven at the workshop; he hires the rest of the workforce from Uttar Pradesh and Bihar, depending on the nature of work.

Not only does he build vehicles, he has a fleet of 25 or so which he rents to films. Scrap yards are his go-to places for vehicles. “The heap outside my workshop is something of a landmark now,” he jokes. Art directors walk away with the recognition, and technicians like him don’t usually get their place under the sun. Does it bother him? “Not really. I enjoy my work. My equation with my art directors, directors and even producers is such that I don’t feel the need for it,” he says.