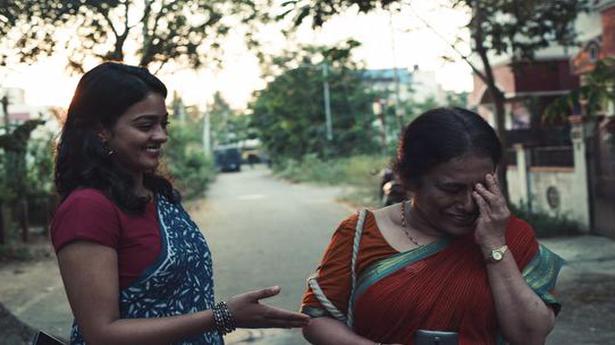 There are many layers to a mother-daughter relationship. Beyond the obvious sweetness lies trepidation, doubt and ambition in their combined lives. And it is not often that we, as a society, address these aspects.

Fifty-year-old Selvi, ‘an ideal Indian mother’, is on her way to realise her once-suppressed dreams, a year after her husband’s death. A clever online business is on her mind but she struggles with self confidence. When Kavitha, her fiercely independent daughter, poses her with a challenge, Selvi is left with a decision that only she can make.

B Selvi & Daughters is a story that delves knee-deep into the various aspects of a mother-daughter relationship. The Tamil short film which runs for about 20 minutes, won a grant by the Her&Now project for films promoting women’s entrepreneurship offered by Deutsche Gesellschaft für Internationale Zusammenarbeit (GIZ), and will be released in collaboration with GIZ later this year.

Directed by Drishya, a Chennai-based theatre practitioner, the film was made by a mostly-female crew and stars veteran actor Kalairani as the mother and Super Deluxe fame Gayathrie Shankar as the daughter. The creative producer behind the film is Tarana Reddy.

“I was writing this feature before the opportunity from GIZ came along. I feel that in Tamil cinema mother-daughter relationships are not often portrayed in a realistic way. I wanted to get into the complexities,” says Drishya, adding, “The generation gap between our generation and my mother’s is quite huge. And we often take the freedom we have for granted.”

The story stems from Drishya’s realisation of how difficult it is for a mother to balance her personal life with her career. “There is a dream within all mothers, but there is a deeply ingrained fear and insecurity as well.”

From a creative perspective, it was really important for Drishya that the film had a female gaze. This worked in their favour when the team realised that everyone around them had a similar story to share. It was also important that the lead actors share a warm rapport since the story primarily explores their relationship.

Gayathrie adds, “Kalai ma’am and I had to build a rapport over a few days and the chemistry had to show on screen. So, in between shots, we would sing and dance together, and sometimes even others would join.”

The actor had heard the narration and felt it was a relatable story. “Then Drishya and I started sharing our own mother-daughter stories. We had a very similar thought process running,” says the actor, noting that the character of Kavitha was very much like her. But her mother is nothing like Selvi, and which was why working on a relationship with Kalairani’s character of Selvi was important, she adds.

Coming from a theatre background, Drishya’s approach to films is very influenced by the medium. “The magic that happens when you have rehearsed, and when you have a rapport with your co-actor is something else,” Drishya adds.

In one of the scenes, where the characters are confronting each other, they are made to walk around the house and improvise in terms of the movement. “They should move comfortably in their own home. I blocked that scene like how I would for a play,” the director says adding, that such creative influences add to realism.

2020-05-09
Previous Post: Tired of biased Marketplaces like Fiverr to promote services and products? – Check this!
Next Post: Have at all times been all in favour of bettering psychological state no longer practising lengthy hours: Virat Kohli