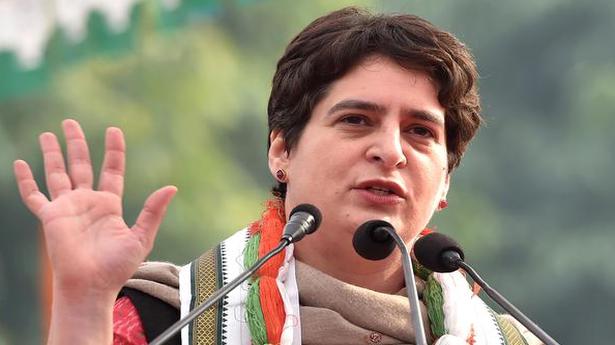 Priyanka, Puri spar over her keep in Lodhi Road bungalow

Media reports stating that the Union government had agreed to a request made by Congress general secretary Priyanka Gandhi Vadra to allow her an extension of stay in the Lodhi Road bungalow sparked a sharp Twitter exchange between her and Urban Development Minister Hardeep Singh Puri on Tuesday.

Tagging one such news report, Ms. Vadra took to Twitter to call it “fake news” and clarified that she would be vacating the bungalow by August 1.

Mr. Puri promptly countered her by stating that a ‘powerful’ Congress MP did make such a request.

“This is FAKE NEWS. I have not made any such request to the government. As per the eviction letter handed to me on the 1st of July, I will be vacating the government accommodation at 35 Lodhi Estate by the 1st of August,” tweeted Ms. Vadra.

The news report said that “Prime Minister Narendra Modi in a statesman like move had agreed to her request and allowed her to stay in the bungalow for some more time”.

“Facts speak for themselves! A powerful Congress leader with much clout in the Party called me on 4 July 2020 at 12:05 pm to request that 35, Lodhi Estate be allotted to another INC MP so that Priyanka Vadra can stay on. Let’s not sensationalise everything please,” Mr. Puri tweeted.

Replying almost immediately, Ms Vadra said, “If someone called you Mr Puri, I thank them for their concern, and thank you for your consideration as well but it still does not change the facts: I have made no such request, and I am making no such request. As I said, I will be vacating the house by the 1st of August as required by the eviction notice”.

The Minister responded with more details about the Congress MP without naming anyone.

“The leader who called me, & many others, is at the very top of the Congress hierarchy…the same political advisor who speaks and acts on your family’s behalf. It was when he requested that we decided to give a two month extension in good faith”, Mr. Puri said.

Earlier this month, the Urban Development Ministry asked the Congress leader to vacate her official bungalow at Lodhi Road as she was no longer a Special Protection Group (SPG) protectee.