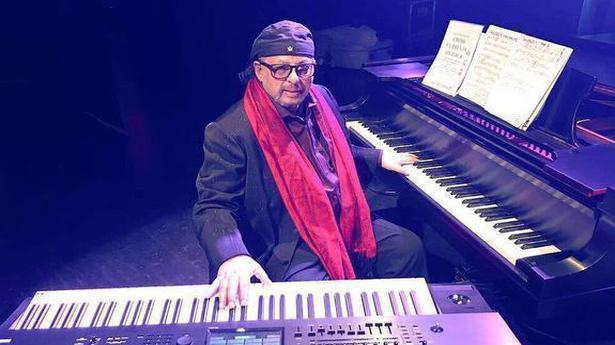 What could possibly be the sound of a musician who has been playing for over five decades and carries the mantle of ‘godfather of jazz in India’? “It is the sound of tomorrow,” says legendary pianist Louiz Banks, who still feels nervous when performing the opening song at a concert. His biography, Louiz Banks: A Symphony of Love, was released last month to coincide with his 80th birthday.

Born into a musical family, Banks learnt the ropes from his father — trumpeter George Banks, who was part of Teddy Weatherford’s band in Calcutta in the 40s. Later, the family shifted to Darjeeling where Banks grew up and became an integral part of his father’s band at the local gymkhana club.

“Jazz is freedom. It’s never the same twice. I’m not repeating myself and getting bored. It is constantly changing with time and is a journey of discovery,” he says.

It was Calcutta that gave him the opportunity to truly explore the music and find himself. “Park Street in the 70s was like Broadway or West End — throbbing in the night. Every restaurant was full of people enjoying themselves. Live bands performing in nightclubs on either side of the street. What a scene!” he recalls.

As the bandleader at Blue Fox, he was a heavyweight in this booming scene. Consisting of vocalist Pam Craine, guitarist Carlton Kitto, and saxophonist Braz Gonsalves, among others, the speciality of the Louiz Banks Brotherhood was jazzifying pop tunes, which got the crowds dancing.

“It was the best band ever. We were living hand-to-mouth, hardly making any money. But we were very happy, playing music every night,” he remembers. However, with the gradual demise of that music vibe, he had to look for employment elsewhere.

His saviour came in the form of fabled music director R.D. Burman, who was impressed by Banks’ unique flair and the possibilities it presented for film music. “R.D. Burman discovered me, brought me to Bombay, and I discovered money,” he says. It was Banks who composed the piano sections for the director’s tunes.

Among the other music directors he worked with, Banks was really impressed with Pyarelal’s (of Laxmikant-Pyarelal) knowledge of orchestration and had fun working for Bappi Lahiri, who was sometimes clueless about which song was being recorded.

The opportunity to compose ad jingles, however, was a turning point in Banks’ life. He went on to become the ‘jingle king’. “The primary restriction when making jingles is the time frame. In 20 seconds, you have to make memorable music that sounds complete in itself,” he says. And his favourite? The one he composed for Dairy Milk chocolate, he says, which bagged multiple awards.

While jazz is Banks’ first love, fusion is a close second. During the 70s, fusion music was being explored prolifically, and the band Shakti was at its helm. While watching a performance of Carnatic singer Ramamani, Banks got the idea of forming a band that would fuse traditional jazz with Carnatic music. He began writing compositions using Carnatic scales, leading to the formation of Sangam in 1980.

The band went on to play over 50 concerts in Europe, introducing Western audiences to a unique form of jazz fusion they hadn’t heard before. “People were absolutely blown to see a lady in a Kanjivaram saree and big bindi belting out Carnatic ragas, accompanied by South Indian percussion and a jazz trio,” says Banks.

A more composite blend of fusion was attained when he formed the band Silk with vocalist Shankar Mahadevan, percussionist Sivamani, mridangist Sridhar Parthasarathy and bassist Karl Peters. Owing to Mahadevan’s vocal prowess in both Hindustani and Carnatic, Silk’s music has traces of both. “That man amazes me. He can do anything with his voice. I can give him the most difficult phrases to sing. He will sing it and make it better,” says Banks about Mahadevan.

Besides Sivamani, the other rhythm expert in Banks’ army is drummer Ranjit Barot, whose musical journey with Banks started with Sangam. “Ranjit can do sargams and vocal konnakols besides playing jazz. So he combines all of that,” says Banks.

Given this stellar background, Banks has been invoked numerous times for Indo-jazz projects. In 2015, tabla maestro Zakir Hussain roped him in for his band Crosscurrents featuring American jazz saxophonist Chris Potter and bassist Dave Holland. Banks was also part of ‘Floating Point’ (2008), a fusion album by legendary guitarist John McLaughlin and accompanied the legendary saxophonist Dizzy Gillespie on his India tour in 1984.

An opportunity to make a tribute album titled ‘Miles from India’ (2008) almost landed him a Grammy. “They wanted to project the music of Miles Davis in a different way. So, they thought of me to use fusion aspects and incorporate it into Davis’ music,” says Banks.

Today, at 80, Banks keeps himself going by playing with musicians half his age. The Matrix Trio, consisting of Banks, his son Gino on drums, and Sheldon D’Silva on bass, forms the backbone of numerous projects with different musicians, who play a derivative of contemporary jazz.

“There is a resurgence of jazz today. They don’t play the old standards. Rather, they aim for original compositions and I’m trying to push this growing tribe as much as I can,” he says.

“When I think of Louiz, the image that appears in my mind is that of a gentle, legendary giant of not just the music world, but also art at large,” reads the foreword by tabla maestro Ustad Zakir Hussain in Louiz Banks: A Symphony of Love (Rupa Publications), by Ashis Ghatak.

Written more or less in a chronological fashion, the book begins in colonial Calcutta where Banks found his place in the flourishing music scene. His talent bloomed especially as a bandleader with the ability to bring out the best in the musicians working with him. The book evokes memories of those glamorous Calcutta evenings and traces Banks’ collaborations with the legendary Pam Craine, Don Saigal, Braz Gonsalves and Carlton Kitto until his migration to Bombay at the invitation of R.D. Burman.

Banks’ versatility and his ability to adapt to changing trends and times are highlighted in the book. Here was a composer who could easily shift from the intelligent music-making of jazz or producing lengthy soundtracks for musicals to easy film tunes and 60-second ad jingles.

Banks’ promoted the Indi-pop sound of Alisha Chinoy and other artistes of the time, and his pioneering Indo-jazz fusion creations with the bands Sangam and Silk also emerged.

But Banks has not forgotten his first love — jazz. He has gone on to produce original material with drummer-son Gino Banks while establishing a vibrant Indo-jazz scene by kickstarting numerous bands.

The book, however, loses out by straying from the music. Metaphors and hyperbole take the reader away from the central theme. The last chapters, for instance, are dedicated to eulogies to Banks by different musicians. The book falters in not being an objective biography of an extraordinary musician, but more a hagiography by a starry-eyed fan.

The author is a freelance journalist who writes on music and culture.