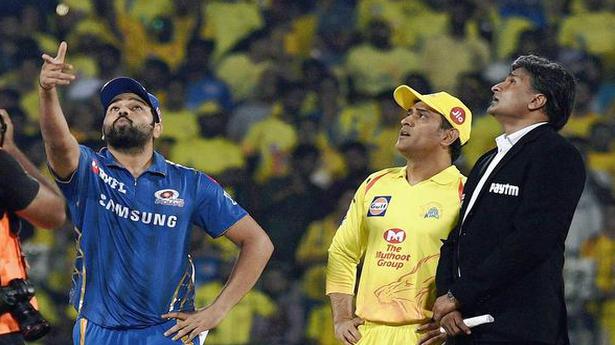 Indian Premier League | The day you want it was once, and is not

In an ideal world, crowds in Mumbai would have trudged out of a busy Churchgate station, mostly in Blues, with a liberal sprinkling of canary yellow among them making their presence felt.

But this was not an ideal Sunday, as it’s not an ideal world. It’s the COVID-19 world where life doesn’t have life anymore as people struggle for existence.

There wasn’t be any IPL at 8 p.m., there wasn’t a Mahendra Singh Dhoni ambling across the Wankhede turf with a disarming smile, and Rohit Sharma wasn’t pulling a fast bowler with nonchalance.

What would have been…

This IPL would have been Dhoni’s comeback tournament after eight and a half months. He would have again led the side, face giving away nothing but unbridled joy when Chennai Super Kings does something.

This would, perhaps, have been the last year with CSK’s ‘Dad’s Army’ — with a lot of players like Suresh Raina, Harbhajan Singh, Shane Watson unlikely to feature in yellow next year.

This was probably Dhoni’s chance to get back into the groove and show the world why Rishabh Pant and KL Rahul can still be asked to wait for one more global tournament.

If the IPL doesn’t happen, and the World T20 is held this year (subject to normalcy), will we see Dhoni in India blues again? His fans may not like it, but likes of Sunil Gavaskar, Virender Sehwag and Kapil Dev believe he won’t — not without reason.

You will miss Virat Kohli’s agony and ecstasy with the Royal Challengers Bangalore.

The capacity crowd at Eden Gardens would have shouted their lungs out. Some for the players, and some for Shah Rukh Khan sitting on the lower tier of the Club House balcony.

We probably won’t get to know how good Anil Kumble’s third stint as a mentor/coach (after MI and India) would have been, with a passionate owner like Preity Zinta watching every Kings XI Punjab performance.

Pant, on his part, would have liked to rock the IPL stage — something that he had made his own in past few years, with those audacious hook shots even when he is off balance.

How well would have Steve Smith captained Rajasthan Royals? Good enough to force Cricket Australia selectors to hand back the captaincy to him from Aaron Finch? We might never know. It was 8 p.m. on Sunday and IPL didn’t start. Deal with it folks.