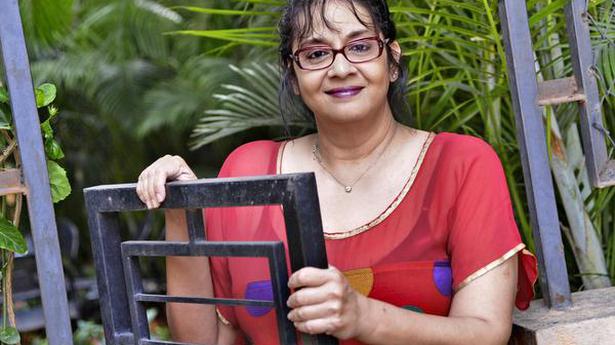 From Bengaluru with love

Bangalore Blues is the latest album by Jazz vocalist and author Radha Thomas which is soon set for release. It all started in 2011 as a Google search for Radha who was looking for a piano player and found Aman Mahajan just two streets away in Cox Town. “A match made in musical heaven” she says as they have since been working together, composing and playing much music across India and Europe. While their music is rooted firmly in jazz, there are definite strains of India in the songs. But Radha, who grew up mostly in a boarding school in Panchgani, joined a rock and roll band and later lived in New York. Radha Thomas spoke with Metroplus about the making of her album.

Is Bangalore Blues a melancholic tribute to the city?

The album didn’t happen overnight. Aman (Mahajan) and me, have been writing and trying to perfect the music for almost ten years. It’s only now that we felt ready to make an album. It’s called ‘Bangalore Blues’ because that’s the title track. This is a song I wrote a while ago, when I wasn’t in this city, and missing it a lot, feeling all nostalgic about it. The song got completed after I met Aman and he added his magic to it.

The album is not so much an ode to Bangalore as it is a just a statement of fact. I think that missing Bangalore and writing a sad song about that is very different to living in the city and facing day-to-day issues. We have another song called ‘Load Shedding,’ which is all about the power cuts in town. So it’s not all rosy and pink you know. Sometimes it’s black and candle lit. We have a video for this song, which was actually shot entirely in candlelight by this gifted film maker, Sharath Holla. https://youtu.be/PMo6jDg5TEQ

Could you talk about the process of creating the album?

I wrote all the lyrics to all the songs. Two of the melodies were composed by Aman, ‘Leifmotif’ and ‘Load Shedding.’ All the others were mine, but with huge inputs from Aman in terms of chords and arrangements. So, it’s a huge collaborative effort. Aman and I tend to get the same ideas almost simultaneously.

Could you describe the songs?

‘The Morning After’ with Indian melodic influences and a jazz treatment, describes the after-effects of a night with supersized gin and tonics with a girlfriend in lower Manhattan. ‘Jailer’ is a waltzy song that talks about a terrible experience that I had years ago. Rather than tackling the abuser, it was happier to write songs about it. ‘Would I Lie for you’ is a funky tune used with a typical Mridanga korvai to suit the rap lyrics. The Indian influence is evident here, but the treatment is neo jazz.

‘Leifmotif’ a delicate composition by Aman is in seven beats for the most part. The buried origins of this song are in the raag Yaman, but with so many jazz substitutions, it is only felt and not heard. ‘Only Illusion’ has syncopating rhythms and changing time-feel..a meditative song of love and longing. The piano work is almost classical in nature. ‘Bangalore Blues’ talks of a snowy winter’s day in New York, when I longed for the jacaranda trees and greenness of home.

What made you choose artist Paul Fernandes to be associated with your album and video?

Paul Fernandes is a chronicler of Bangalore an he has a quaint, ironic and witty way of capturing this city in his art. He is really quite astonishing. I asked him if he would let me use his art for my album and to my utter joy he said yes. Not only that, we decided to use many of his artworks for a video for the title track.

After training in Hindustani how did you find the shift to Jazz cope with your timbre?

I studied Hindustani music a long time ago. And even then, I was already in a rock and roll band. I took lessons to help me sing better and also to be able to incorporate the improv techniques with my own singing.

Your huge break in the 70s is after you joined the rock ‘n’ roll band, Human Bondage?

I was auditioned by a very serious organisation called Jazz India, when I was about 18, singing at Chin Lung Restaurant in Bangalore. They said if they liked my singing, they’d help my career – if they didn’t like me, I was out of luck. I guess I was good enough, because they paved the way for me to New York to meet some amazing musicians and perform and get myself a little experience.

Aman Mahajan says Radha and he have worked together for almost a decade now, playing all kinds of music with different groups, focussing mostly on jazz standards and original music. What sets Bangalore Blues apart, he says, is that “it’s a collaboration in the truest and most basic sense – a completely stripped-down piano-voice duo version of songs by the two of us.”

2020-03-17
Previous Post: Coronavirus | All nationwide camps, apart from the ones getting ready for Olympics, postponed: Rijiju
Next Post: Stock futures plummet, triggering a buying and selling halt amid uncertainty at executive response to virus outbreak