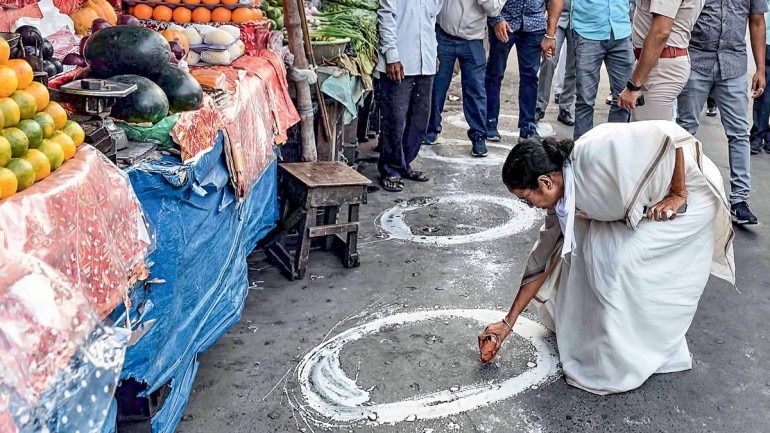 Social distancing: CM Mamata draws rings to show people where they should stand.

Since the national lockdown came into force on March 25, Chief Minister Mamata Banerjee has hardly been home. Indeed, she has been everywhere else, from the markets to hospitals to banks and wholesale godowns, overseeing the administration’s war against COVID-19 first-hand. In one such visit to the Janbazar market in Kolkata, the chief minister picked up a brick and drew circles on the road near some vegetable vendors, demonstrating how people should maintain social distance when buying daily needs. As a crowd gathered to see her, Banerjee reprimanded them, asking them to maintain distance among themselves.

Her efforts have earned kudos, but also have many worried. Prime Minister Narendra Modi has called twice, requesting her to be cautious while in public. The hands-on approach is evident in the home-made mask, basically a large white triangular handkerchief, that’s often hanging around her neck like a scarf.

Mamata has even demonstrated how to make a mask at home (from a used ganjee). She’s also been dispensing some homegrown advice, like wear slippers which can be washed and worn, and baths in tepid water after returning home from outside. She does her own chores and is cooking her own meals, mostly a mish-mash of rice and potato. A lockdown is also the best time to get creative. Mamata has written a poem, lyrics and composed music for a song.