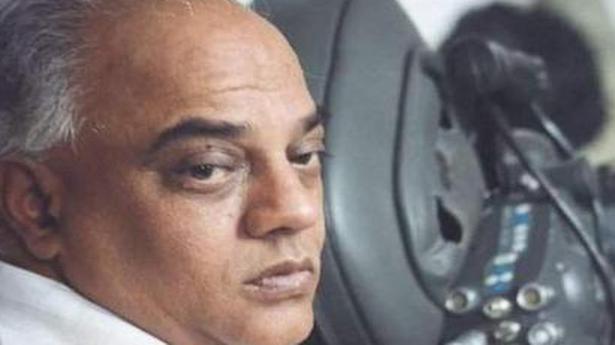 Cinematographer B Kannan passes away

Cinematographer B. Kannan, who was renowned for his collaborations with veteran filmmaker Bharathiraja died in Chennai on Saturday. He was suffering from age-related ailments and had been admitted to a private hospital in the city.

Often referred to as ‘Bharathiraja’s eyes’, Mr Kannan has worked on around 40 films with the filmmaker. Some of their notable collaborations include Alaigal Oyivadhillai, Kaadhal Oviyam, Mann Vasanai, Pudhumai Penn and Vedham Pudhidhu.

He is the son of noted filmmaker A. Bhimsingh and the younger brother of editor B. Lenin. Mr Kannan is survived by his wife and two daughters.

In a video statement, Mr Bharathiraja said that his demise was a great loss to the film industry. “Tamil film viewers across the world got to experience Tamil culture and heritage through what his lens captured. For filming, I didn’t take my camera- but instead had Mr Kannan and his eyes,” the veteran filmmaker said.

Having worked with him for around 40 years, Mr Bharathiraja said Mr Kannan deserved all the praise and acclaim that he as a filmmaker had received from the audiences.

Since 2015, Mr Kannan was the head of the Cinematography department at the BOFTA Film Institute. G. Dhananjayan, founder said that the cinematographer’s students always considered him a ‘father figure.’

“Despite having worked on so many successful films with Mr Bharathiraaja, his humility always stood out. When the Tamil film industry was making a transition and going completely digital instead of using film, he was enthusiastic to continue learning about this technology with everyone else in the field,” said Mr Dhananjayan.

2020-06-13
Previous Post: On the warpath
Next Post: I’m hoping are living presentations don’t seem to be a factor of the previous: Kaneez Surka – extra way of life