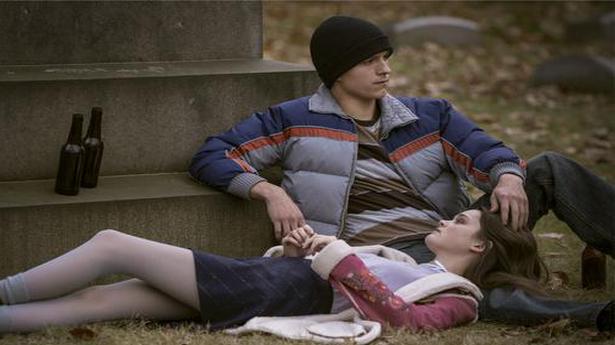 The Russo Brothers can’t quite recreate their ‘Avengers: Endgame’ magic in this dreary adaptation of Nico Walker’s novel

One can feel every one of the 141 minutes of the grim drugs and crime drama, Cherry, ticking by excruciatingly slowly. Earlier offerings by the Russo Brothers, Anthony and Joe, — Captain America: Civil War (147 minutes), Avengers: Infinity War (149 minutes) and Avenger: Endgame at a bottom-numbing 181 minutes zipped by merrily, immersed as we were in a click of Thanos’ fingers and its disastrous consequences.

Unfortunately, there is no such respite in this dreary adaptation of Nico Walker’s semi-autobiographical novel, Cherry, about a drifter who drops out of college, serves as a medic in the war in Iraq, becomes addicted to opioids as a way to deal with PTSD, and becomes a bank robber to fund his habit.

Tom Holland is arresting as Cherry and practically the only reason to slog through the aforementioned two-odd hours. Ciara Bravo as Cherry’s girlfriend, wife and partner in drugs is riveting as well. Jack Reynor as Cherry’s peddler, Pills and Coke, Jeff Wahlberg as Jimenez, who trains with Cherry as a medic and Michael Rispoli as Tommy, a wiseguy Cherry meets when he is working as a server, provide adequate support.

Stylishly and distractingly drenched in scarlet, Cherry moves back and forth in time, with a prologue, epilogue and chapters to mirror its bookish origins, without any of the “unforgettable mix of doomed and dazzling,” The New Yorker mentions in its review of the novel.

The matter-of-fact tone of the novel, which does not slip into self-pity or despair, has not translated well on to the screen, coming across as tedious. The attempts at black humour with Father Whomever, Dr. Whomever (Thomas Lennon) and Sgt. Whomever (Pooch Hall) are dead on arrival.

Cherry’s baptism by fire in the war when he has to pack in a soldier’s intestines on the first day of work, is reminiscent of Snowden spilling his secret and his guts on the floor of the airplane in Joseph Heller’s Catch-22. Unfortunately, Cherry is a pale reminder of that savage satire. There is no question of the terrible consequences of the War in Iraq and the opioid epidemic. Cherry, however, is too formulaic to make any sort of impact the many needles and belts to ankles and arms in a search of a vein notwithstanding. The dog, thankfully survives the carnage.

2021-03-13
Previous Post: A documentary traces the journey of Meeting Rooms, the oldest cinema corridor of Udhagamandalam
Next Post: The Hindu Explains | How is the Indian authorities planning to reply to the Cairn tax ruling?