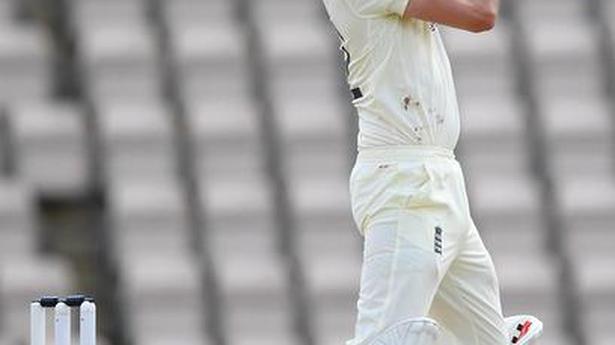 Roston Chase proved a thorn in England’s side once again as West Indies strengthened its grip on the first Test at Southampton on Saturday.

England was 168-3 in its second innings at tea on the fourth day, 54 runs ahead of West Indies’ first innings 318.

Chase had taken 2-45 in 19 overs, although both Rory Burns and Joe Denly donated their wickets to the off-spinner.

And in between their exits, Dom Sibley — bowled off a no-ball immediately after completing his half century — fell for exactly fifty when he was caught down the legside off Shannon Gabriel.

Zak Crawley was 38 not out, with England stand-in captain Ben Stokes yet to get off the mark.

Allrounder Stokes, leading the side in the absence of Joe Root, had top-scored with 43 in England’s lowly first-innings 204.

The paceman then led from the front with the ball as well by taking 4-49.

England resumed Saturday on 15-0 in ideal sunny batting conditions on a placid pitch. West Indies was without a frontline spinner after omitting Rahkeem Cornwall.

But they could call upon Chase, who although a batting all-rounder took a Test-best 8-60 when West Indies beat England at his Barbados home ground last year en route to a 2-1 series win.

And having already made 47 in this match, he removed well-set opener Burns for 42 when the left-hander saw a careless cut caught at backward point to end a first-wicket stand of 72.