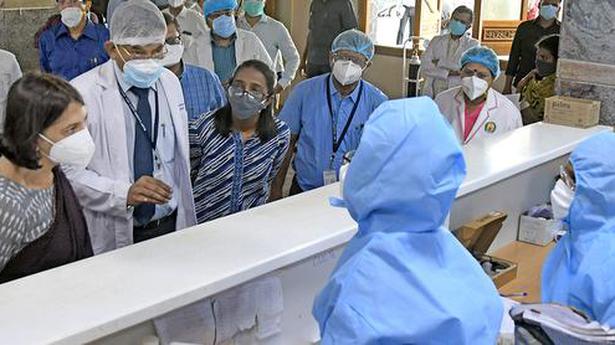 The Central team that is on a visit to the State capital to review the COVID-19 scenario in Tamil Nadu has suggested that the State government have focused death audits in districts and go for broader containment zones, among other things.

The Central team, led by IAS officer Arti Ahuja, Additional Secretary in the Union Ministry of Health and Family Welfare, joined Chief Secretary K. Shanmugam in reviewing the COVID-19 situation in 15 districts, through videoconferencing from the Secretariat, on Thursday. The team, accompanied by Health Minister C. Vijayabaskar, inspected various places starting from the Rajiv Gandhi Government General Hospital. Rajendra Ratnoo, Government of India’s monitoring officer for Tamil Nadu, was part of the team.

Later, they visited a COVID-19 care centre at K.P. Park in Pulianthope, a fever clinic and a containment zone near Pattalam, a screening centre in Guindy and the newly-developed COVID-19 facility at the National Institute of Ageing on the premises of the King Institute of Preventive Medicine, Guindy.

The team also visited a fever clinic in Arimuthu Street, Choolai (Ward 78 of Thiru-vi-ka Nagar Zone). Later, they visited the control room at the Directorate of Public Health and Preventive Medicine. Health Department officials said that the team was briefed on the measures being undertaken and the members would be in the city on Friday. The team also comprised representatives from the National Centre for Disease Control and the Jawaharlal Institute of Postgraduate Medical Education and Research. Elaborating on the Central team’s suggestion for death audits, the officer said: “Wherever the number of deaths are more than the State average, in the districts, they want focused death audits. But on a national level, the rate of death in Tamil Nadu is low.”

Besides suggestions on going for broader containment zones and effective contact tracing, the team suggested that focused death audits be held in districts with high fatality rates, a senior officer said. Another officer said the team stressed on contact tracing, early detection of cases, mortality analysis and increased testing for vulnerable people.

DGP J.K. Tripathy, Revenue Secretary Atulya Misra, Health Secretary J. Radhakrishnan and other senior officials were present for the joint review meeting. The team will continue the review in Tamil Nadu till Saturday.