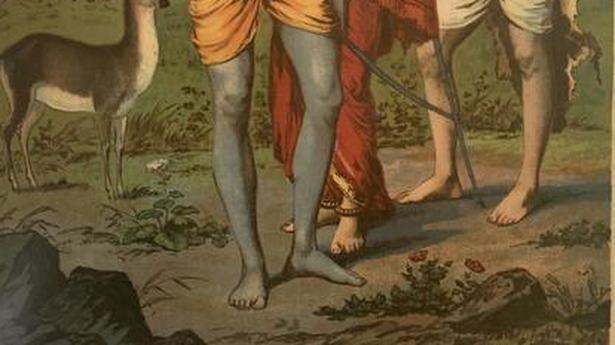 A e book and a movie on Raja Ravi Varma

As the Raja Ravi Varma Heritage Foundation turns five, there are interesting events scheduled online. “April 29 is a special day for the Foundation as it not only marksRavi Varma’s birth anniversary but also reinforces our belief in preserving and promoting his legacy,” says Gitanjali Maini, Managing Trustee and CEO of the foundation.

The Foundation had initially planned a three-session symposium but the lockdown forced them to re-strategise with an online launch in partnership with Google Arts and Culture platform. On April 29 at 11am, an exhibition of rarely seen Ravi Varma oil paintings and prints will be unveiled. Rukmini Varma, Chairperson of the Foundation says, “It is a pride to see the works of my great, great grandfather being brought to the forefront.” Gitanjali spoke with MetroPlus about the event and other activities of the foundation.

How much has the Raja Ravi Varma Heritage Foundation done to promote his legacy?

Since the foundation’s intent is to preserve and promote Ravi Varma’s legacy, we are engaged in the study and research of his work. We are documenting his works that are coming to light only now. The Foundation is also involved in authenticating Ravi Varma’s original works. We have issued ‘not authentic’ certificates to those paintings that are not, free of charge. We conduct educational events and align with academicians, experts, educators and resource people who have knowledge of Ravi Varma.

Being a not-for-profit organisation, we do not charge for any of our activities, nor have we ticketed any of the events. We stream our events live on social media and share content through posts and short videos.

We also share content and research information with museums in Paris, Berlin, Singapore, London, Toronto and St. Petersburg and have collaborated with museums in India on various facets of Ravi Varma’s work. We have created educational content on Ravi Varma’s work that has been incorporated into a credited course for students at the Srishti School of Art, Design and Technology in Bengaluru.

Is there a record to the number of Ravi Varma paintings and prints?

There is no definite count to the number of paintings done by Ravi Varma. We do know through documented evidence that when he sold the Ravi Varma Press to German print-maker Fritz Schleicher, he also sold around 90 lithographic exemplars (small size paintings done in oil on canvas). So we know that there were at least 90 lithographs created by him that were later mass produced as prints. The rest have been created by artists who were employed in the press. We are unable to put a finite number to his works as no one has a physical record of the same.

We are, however, in the process of documenting all his works that we come across and hopefully will be able to put a number to it soon.

What is on the agenda for April 29?

The online event will showcase some never-before seen artworks. There will be a short art film Wanderers between Worlds directed by Vikas Urs, an alumni of the FTII, Pune. Urs has retraced the journey of the artist in the film based on the writings of Erwin Neumayer and Christine Schelberger, authors of several books on Raja Ravi Varma. It tells the story of how trying to be a businessman and starting a printing press took a toll on Ravi Varma’s creativity.

We commissioned the services of author and historian Manu S. Pillai through a grant from the Foundation. A book, The World of Raja Ravi Varma: Princes and Patrons documents Ravi Varma’s art.

Could you talk about the timeline?

On April 29 we will release Manu Pillai’s book and Vikas Urs’ film. We have planned two sessions — one for the Indian Standard Time zone and the others for those who will log in from the Americas, Canada and parts of Europe. We will be showcasing both the book and the film to the audience who log in on that day.

What is the status of the digital archiving?

The foundation hopes to create an archive of all information relevant to Ravi Varma’s life and work. None of the information on the digital archives will be for sale, nor will they be made available to public without a formal request. We would like people to reach out to us so that we can assist them with the correct information and research.

Our association with private collectors around the world has also helped. The foundation does not collect or stock any inventory as it is not a space that we wish to be in. It is only through digital archiving and e-library.

Could you comment on Ravi Varma’s link with Mysuru and Bengaluru?

It is true that Ravi Varma often stopped in Bengaluru on the way to Mysuru. He often halted in Bengaluru and commented on the beautiful gardens, weather and cherished the city’s cosmopolitan vibe. He was well acquainted with Maharaja Jayachamrajendra Wadiyar of Mysuru and did a large body of work for the royal family. However, we believe, his brother, C Raja Raja Varma’s death in Bengaluru in 1905, was the end of Ravi Varma’s tryst with the Garden City.